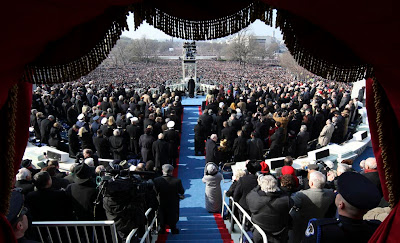 Davening at the Coattails
by: Schvach Yid

America’s new president has been in office less than two months, a period of time too
brief to allow any development of opinion concerning his public service.

But why worry (What! Me worry?)? All the pre-election speculation about his competence to hold office was for naught; after all, when have we ever had a competent
president?

The Obama wave is disturbing, however. Hype is hype, and emunah is another thing altogether, and when the two are merged…

I’m not a political person, my concerns about the safety and longevity of the Jewish State of Israel aside. I know nothing about politics, public administration, bureaucracy, foreign relations, etc. These matters have never held an interest for me. But the goings on in the American workplace disturbs me greatly, and I’m not referring to the economy.

The federal government after all, at least in one sense, is a workplace.

Perhaps I’ve just signed my death warrant at the hands of the Blogger Gestapo; if not, then the following interview may accomplish just that.

And so, jadies and jents, I offer you the very first, and one time only, interview with Schvach, conducted by Schvach, and may HaShem have rachmonas on us all.

Interviewer: Well Schvach, with all the enthusiasm spawned by the recent election of President Obama, what’s your view of this historic event?

Schvach: I just gave it.


I: The 1983 movie Trading Places starring Eddie Murphy has been invoked by some as a sort of battle cry for the very up and coming, and successful Black middle class in America. What’s your take?

S: Trading places? Perhaps in the forthcoming meeting between Pres. Obama and Britian’s Prime Minister Brown, but that’s about all.


I: Don’t be so cute Schvach! And don’t be so brazen with your answers, lest you receive an unwelcome knock on your door in the middle of the night. Do you have any kind words for the First Lady, Michelle Obama?

S: Well, I don’t know (is that sufficiently contrite?). At a televised meeting with school children she referred to her hubby as ‘this guy’. After having had virtual non-stop indoctrination that such informal expressions of speech are unacceptable, I was surprised to hear her use one with her husband, the new president, especially before a group of school kids. I was glad he didn’t respond by hopping up and down in his chair shouting ‘I am a Black maaannnnn’.


I: What do you think of Michelle?

S: I don’t. But I am curious about the possibility of the First Lady conducting a televised tour of the White House, much as did Jackie Kennedy when she was First Lady.

S: I’d like to see how she redecorates the place. So far, Mr. and Mrs. Prez have trashed a bust of Winston Churchill. But they just moved in so let’s see how things progress. Perhaps they’ll get rid of the bowling alley too; I can’t imagine what will be selected as a replacement.


I: Surely you must have some other views on the First Lady.

S: No, not really; however, I take no small quantity of amusement considering the monikers that some rappers may have already applied to her.

S: Okay, but it’s your interview.


I: Can’t you muster any respect at all?

S: Respect? Baloney! I’ve been laid off. I have the freedom to hang myself if I choose, so bug off with respect.


I: How about your view of America’s prospect for our first female president. What about Hilary Clinton sometime in the future?

S: Forget Hilary. I’ll vote for Gwen Iffel. She’s smart, and she has lots of personality.


I: There, you see, you are capable of at least a modicum of diplomacy after all.

S: No shit! See here, diplomacy is the profession of dishonesty, and so, honest as I am, it’s a rare moment when anything diplomatic works its way out of my mouth.


I: What about Nancy Pelosi, the current Speaker of the House of Representatives?

S: Nope! I love her décolletage, but did you see her jump up and give the President a premature standing ovation when he addressed a joint meeting of Congress? She’s too eager; she looked had. Perhaps she should be renamed Marionette.


I: What is your opinion of the persistent accusation by some that President Obama was not born in the United States and is therefore constitutionally unqualified to serve as president?

S: Uhhh, well, I suppose given the speculation over a more vigorous (a JFK term) effort to pass through Congress a bill to provide reparations for Black Americans, it might be wise to have a counterweight to perch over the President’s head. What do you think?


I: You’re a schmuck! What’s your opinion about the economy?


I: If you could give the President and First Lady a welcoming gift – a house warming gift – for their new move into the White House, what would you choose?


I: That’s just like you, you juvenile jerk, and you just missed a great opportunity by not saying WASP Nest Brand toilet paper. It would be (bee) a mutual thing.


I: Earlier in this interview you said America has yet to have a competent president. How so?

S: Dwight Eisenhower was president when I was born. Republican that I’m not, I feel safe in stating that he may have been the only competent president to serve during the course of my life to date.

I: Eisenhower; how’s that?

S: He proposed and initiated the building of the Interstate Highway system, albeit for military purposes. It’s useful for the general public, you know. But easily, the president I most favor is Richard Nixon, nolo contendre.


I: That was Agnew. You really are a schmuck. Why Nixon.

S: Are you kidding? Nixon was humor exhibit number one among Chief Executives. The guy (it’s okay, Michelle…) provided a laugh a minute. He was hysterical. Too bad Spiro was his V.P. It should have been Mohammud Ali; he was at least as entertaining, if not more so. And how things would have gotten done with Vice President Mo dropping by the Oval Office. Howard Cosell could have been the White House Press Secretary, and Woody Allen could have run the U.S. Public Health Service and directed the U.S. Marital Relations Board. Just think, the Waif of Jerusalem could have been named Director of the National Parks Service. Agnew was a humorless insult artist. More better Mo Ali as Nixon’s V.P.

S: Yes. You know all about the American workplace? The domination, coercion routines that go on, and the White House – in fact all of government – is undoubtedly the same, just a collection of American workplaces, so it’s easy to imagine the baloney buffet that will be served in the current White House. Remember, regardless of who ascends to the number one position in Washington, he/she didn’t get there by being a nice guy. They’re conniving, manipulating mamzerim, the whole pack.


I: Are there any specific events concerning the new president that you anticipate or to which you look forward?

S: Yes, I’d like to see the Chabad Lubavitch delegation show up at the White House to collect their annual Proclamation from the President. Wouldn’t it be nice (Beach Boys tune) if Al Sharpton were there as a doorman to let them in? I can just picture the scene.
Two Marines open the door, and there stands Al Sharpton to greet the Lubavitchers, clad in a combo three piece suit and doorman’s uniform, complete with cap, and a sticky name label on his chest that reads: Hello, my name is Mud. What a victory lap for Obama!

I: What? You’ve got to be kidding. Look, I’m trying to conduct a serious interview here, and all you can do is crack these insipid jokes? Why don’t you get yourself to Walmart already and buy yourself a brain?

I: Fine, I’ll give you one last shot. I’m sorry Schvach, but I think you have that wrong. The door men at the White House are military; some may be Secret Service.

S: Well, perhaps in the case of the new President, they’ll be Fruit of Islam.


I: Are you nuts? Leave Farrakhan out of this, will you? You go from bad to worse.

I: Because Obama isn’t waging war on Washington; he’s the President you dope! We’re not at war with our own president.

S: Who said we are? I’m saying that Spike makes great films.

I: Yeah. Perhaps we can get back to Mrs. Obama. Do you have anything to add?
S: Michelle? Boring, boring, boring. Didn’t she, as an undergraduate, write a thesis on the topic of Black women at an Ivy League University?

I: You should only live so long as to see the inside of an Ivy League University.

S: What a narcissist, and how unimaginative. Why not do a dissertation on an imagined shoe shopping spree with Imelda Marcos? That surely would have been worth some academic credit with some Political Science department, somewhere.

S: Don’t complain, I could have said celiac sprue.

I: Huh? If you keep this up I’m going to get Julian Bond after you. Do you remember how he handled Gene Hackman in an interview years ago?

I: You doltaholic, get a brain already! No, it wasn’t James Bond, it was Popeye Doyle of ‘The French Connection’ fame.

S: So, have you ever seen the Marine Corps flick Boys in Company C, with Stan Shaw, without Gene Hackman? Shaw’s role became a bit of Black civil rights heroics and served as the paradigm, I think, of much of what goes on in the American workplace today.

I: That again? Is that bad?


I: Hey, I’m asking the questions around here.

S: What’s the matter, don’t you like playing trading places games? Really, how do you feel at work? Harassed? Coerced? Subjugated? Do you like going to work?


I: No way! If I answer that one I’ll never work again.


I: To conclude, how would you sum up your general philosophy of the state of the world, life, etc?

S: Life stinks, then one dies.

I: Is that the best you can do?

S: Alright, but just for you: Buy low, sell high.

You are very creative! I don't think I'd be able to interview you myself. I'd fall asleep. ;-)

oops, I meant to say, I don't think I'd be able to interview MYSELF. I'd fall asleep. ;-) - I didn't mean if I interviewed you, I meant if I interviewed me, I'd put myself to sleep. zzzzzzzz Sorry, cause the other way with the mistake, sounded terrible! Best, tamar

Thanks Tamar. Your A7 radio show and blog site are plenty creative.