There May be Hope Yet!
by: Schvach Yid

And no less thanks to the Kingdom of Saudi Arabia.

Yes indeed, jadies and jents, the web site of the ‘The Kingdom’s’ Ministry of Hajj
(found here: http://www.hajinformation.com/display_news.php?id=2174)
is running two headlines of interest to us, as follows:

‘13Nov2010:- Palestinian pilgrims arrive in Makkah as guests of King’

The Hajj, Islam’s annual pilgrimage to Mecca (interestingly pronounced in Arabic as Makkah – one of two Tanakh Hebrew words for ‘plague’), started this evening and runs through Nov 17th. Once there, male participants are not permitted to wear head coverings for davening in the major shul in Mecca.


On a more pleasant note, here is a video of the concert violinist Midori at Carnegie Hall, in 2009, performing as an encore Heinrich Ernst’s set of variations on ‘The Last Rose of Summer’:


Back in the old days, when I was still a native New Yorker living in my beloved home town, I frequented solo recitals (with piano accompaniment, of course) at Carnegie Hall. Alas, since relocating to this corner of America’s Bible Belt, no such joy bejewels my life, except via the internet. Enjoy!
Posted by Schvach at 3:14 PM No comments:

I just started reading The Garden of Peace by Rabbi Shalom Arush (and I'm not even married!), and all I could think of was this – sorry: 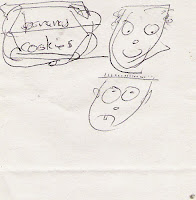 If you wish to indulge in my mental mishap, you can access
information about this stupendous work at:
http://www.breslev.co.il/store/books/family_and_relationships/the_garden_of_peace.aspx?id=7269&language=english
I hope all of you are enjoying Peseach cleaning as much as I.
Posted by Schvach at 1:59 PM No comments:

Hijabs for Israel
by: Schvach Yid

Here’s a link to a video displayed on the Random Thoughts blog site about anti-Israel
‘activism’ on college campuses. Please view it.

According to the Israel National Radio web site, Arutz Sheva, next week will bring us the annual on-campus fête of Israel Apartheid Week. I don’t know if the planned ‘Let’s End the Jewish State’ week will materialize, I mean as a world-wide event. Most of us are very well informed of world opinion against the existence of the Jewish State of Israel, not to mention world apathy concerning the murder and maiming of Israeli Jews, not to mention world advocacy concerning the overt bigotry that’s foisted against the Jewish People/State.

In an effort to answer the university-based Jew haters, and to flex a little post-Purim Jewish pride, I encourage all supporters of Israel, Jews and non-Jews alike, to don appropriately-sized Israeli flags as hijabs, in the case of women, and kaffiyahs, in the case of men.

In addition I have a few replies to those Jew-hating, anti-Israel promulgators (aren’t promulgators a species protected by law?). Now then, for a few good in-their faces responses to the on campus Jew-hating, Israel-hating, pro-Palestinian Arab asserters of US Constitutional first amendment rights (their own of course, not ours):

there is only one appropriate response to the Palestinian exercise of violence for the
purpose of segregating Jews (by elimination) from the Arabs in Israel, and it isn’t by
the passage of civil rights legislation;

if the Moslems want ‘Palestine’, tell them to tell it to King Abdullah of Jordan;

jents, walk up to an attractive Jew-hating anti-Israel female protestor (hopefully
Moslem Arab Palestinian), tell her you are Jewish and vehemently pro-Israel, then ask
her to come home with you; be ready to run like hell;

tell them – no, yell at them – that the Koran should be banished as hate literature;

with tact, remind your favorite Jew-hating Arab protestor that the Arabs come from
Arabia, not from Newark, New Jersey, that they and their Islam spread by violence and
murder, and that they have no legitimate claim to any turf outside the Arabian
Peninsula;

shove the Banu Qurasa into their faces – the murder of the Jews of Medina by Islam’s
founding father, Mohammad and his murderous rabble; tell them we want it back;

tell them you visited the Temple Mount in J’lem; in fact, tell them you walked into the
Dome of the Rock Mosque and recited a Shechechiyanu - they’ll just love you for it;

tell them we Jews intend to bring copyright infringement charges against them for
having rewritten Tanakh;

tell them Israel founded and built all five (I think) universities located on ‘The West
Bank’, and if they don’t knock off their anti-Israel crap we’re going to confiscate their
diplomas;

ask them about female circumcision, that is after the two of you stop running following
your request for her to come home with you; tell them we Jews don’t do that to our
women; we Jews love our women;

tell them you’ve started a ‘Hijabs for Israel’ campaign; pass out Israeli flag hijabs and
kaffiyehs; G-d knows what they’ll do with them (I can easily guess), but they’ll get the
message;

tell them they don’t have to worry about J’lem; we want Medina returned to us;

tell them that if they continue with their naughty dormitory behaviors, the whole lot of
them will be whisked off to Saudi Arabia for a little Sharia correctional intervention -
they’ll just love that!

Finally jadies and jents, forget about peace with ‘those people’ – they don’t want to have peace with us; haven’t you ever read the Koran?

I haven’t posted in a long time, and for a good reason – I haven’t had anything to write
(as is obvious from my last several posts), so in an effort to awaken from the blogging dead (Blog Hill?), here is a little bit of advertising.

I stumbled upon the Jewish music group ‘Pharaoh’s Daughter’ somehow, and have been a fan ever since. They sing excerpts from Chumash, as well as Tehillim and Shabbos z'miros to a variety of original melodies taken from the Middle and Far Easts.

Here are a couple of clips – enjoy!

And here is the group’s web site.
http://www.pharaohsdaughter.com/

Also, if you’re into Ladino tunes reworked into a modern jazzy mode, complete with Ladino lyrics, and if you live in the NY metro area, then you’ll be happy to learn that the Sarah Aroeste Band will be all over Manhattan soon – here’s the link:
http://www.saraharoeste.com/performance.htm
Posted by Schvach at 12:06 PM No comments: