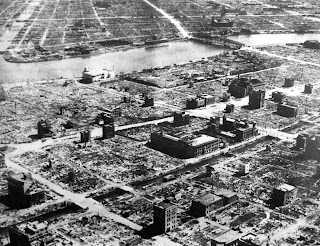 Please forgive me for sounding a bit like Tokyo Rose of World War Two fame, but this
business of Israel going up against Iran’s burgeoning nuclear weapons industry has me a bit concerned.
(photo above: bombed-out Tokyo, 1945)

My psycho-fantasy goes something like this:
Israel takes out Iran’s nuclear weapons manufacturing capability and stock. Iran, however, has an arsenal of a few thousand
missiles, each equipped with conventional warheads,
capable of reaching Israel. Iran uses Israel’s pre-emptive
attack against its nuclear weapons force as its justification for launching a retaliatory strike against Israel with its thousand-fold conventional-grade missiles. In a single day Israel is reduced to rubble.

Sounds stupid? Just remember the Second World War. We all recall the death and utter destruction wreaked by the atomic bomb blasts over Hiroshima and Nagasaki.

Do we recall the death and utter destruction wreaked by the saturation bombing campaigns against the cities of Tokyo, Berlin, Dresden, Cologne, Hamburg, London, and Coventry? Have we forgotten just how much havoc can be wrought by conventional weapons?

Ahmadinawhats may not be so stupid. He may have succeeded in jockeying Israel into a no win situation. Just how large is Israel, and just how many conventional bomb blasts would be needed to render Israel functionally dead?

As far as I know (which is not very much, at least concerning this topic), Israel still lacks the capability of intercepting incoming missiles after they have completed their ‘boost phase’. As far as I know, no country has a defense system that can achieve that, and so where does that leave Israel? 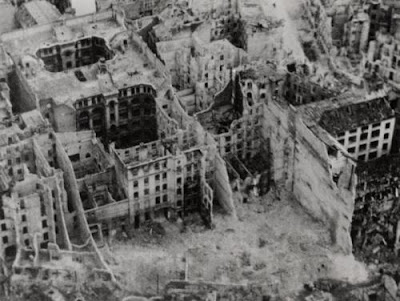