I have more than just a few things in common with my dearly loved and departed
maternal grandmother, aka ‘Oma’, primary among which is/was our shared admiration
of Marlene Dietrich (and I'm not even into blondes!). So without any further ado, here
she is (no, not my Oma):

And for your continued entertainment pleasure, here is the late, great Kahn (no, not the just late, great Ricardo Montalban– he was great too!) with her impersonation of Marlene Dietrich – don’t you just love it?

It’s the name of a blog site, author unknown and unseen. She just posted a bit about her personal schtick with her daddy to be accessed at:
http://shesnamelessfaceless.blogspot.com/2009/01/its-happening-again.html#comment-form

It has rung oh-so-true with me, so here’s my comment:

So what's the problem you're currently facing; some dilemma is irking you? Do you anticipate having your face kung fu'd? Have you discovered 'daddy' in another, and are you drawn to recruiting him/her into your life, certain that you'll live to regret it?

Our problem is that we love our abusers. We will do anything to defend them. We nurture them by giving them all the fodder they want, all the rope they need to hang us. It’s called fear. G-d forbid he should do anything else to us, and let’s not provoke the monster by complaining, so just fluff the freak.

Back in the old days, on my first job as a nurse, I provided care for a ‘kidney patient’.
Her husband was a brutish bully of a man – a vending machine-sized factory worker with a quick temper and the physical strength to back it up. One fine day he arrived on the nursing unit to visit his wife with the older of his two daughters. He wouldn’t let her out of his sight.

As daddy and daughter left at the end of their visit, he slipped his arm around his daughter’s waist; she, as if answering, rubbed her hip against him. Bang! Father and daughter my foot, they looked like a guy and his date. Daddy was f*cking his daughter!

I kept my big mouth shut; my co-nurses were gossiping idiots who hated my guts. They would have gone straight to the guy, and he, no doubt, would have decimated me.

Perhaps half a year later a lengthy article appeared in The Sunday New York Times Magazine, reporting that the daughter had recruited a high school classmate to kill her father, and kill him he did, with a single round from a .22 rifle. The beef – he had helped himself to her on a regular basis, and had ‘moved on’ to her 8 year old (I think) sister.

Unlike you, I loathe my father. He’s now non compos mentis, having suffered a stroke, two closed head injuries, and advancing senility – and I can’t manage to muster one grain
of rachmonis for him. He never put me through a glass door, never slammed me against anything, but the sound of his voice horrified me, not to mention the emotional effect of hearing the sound of loose change and keys jangling in his pants pocket as he approached from a distance. As kids, when we came home in a good mood with smiles on our faces, my father was expert at wiping the smiles off our faces and instantaneously hurling us into an emotional depression within seconds of discovering our glee.

He never straightened out; he could never accept us as adults. His abused continued to include my bother’s children. Thank G-d they live 1,500 miles away and only saw my father once or twice a year.

Face it. With a healthy brain he was a first class son-of-a bitch. Not that he didn’t have problems of his own (he grew up as a Jew in Germany under the ascendancy of the Nazis, not to mention his SOB family). Still, the responsibilities of parenthood….

So, whoever you are, please take stock. The world is filled with injured people - you, me, her, him, them. Thank G-d you’re bright – very bright – and sensitive. Be assured, the pain will never go away.
Posted by Schvach at 1:11 PM 2 comments:

Here’s a bit from Bizarro (he certainly is), accessible at http://www.bizarro.com/
courtesy of The Houston Chronicle, at
http://www.chron.com/apps/comics/showComick.mpl?date=20090116&name=Bizarro

If You’d Like to Boycott Israel, Here’s How
by: Schvach Yid

Thank You Chavi Edwards, of the Just Call Me Chavi blog site, for this tip, at:
http://www.kvetchingeditor.com/ 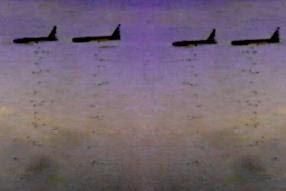 I’m sorry to disagree with the radio comments you made today, but Israel can’t carpet bomb Gaza because Israel does not have heavy bombers. The task can't be done with jet fighters.

Israel needs heavy strategic bombers. The U.S. trashed many of its B-52 fleet in the late 1980’s or early 1990’s following the fall of the Soviet Union. Regrettably, Israel did not/could not acquire any of them.

By the way, I know nothing of the strategy or tactics of staging a B-52 strike, but I can easily imagine that these bombers launched from Israel wouldn’t achieve the necessary altitude until perhaps reaching Turkey, and the distances in and immediately surrounding Israel are so small, I hate to think of the potential for deadly errors and collateral damage should heavy bombers be employed near Israel’s borders.
Posted by Schvach at 2:50 PM No comments:

Here’s Gaza:
Those jerks are complaining about Israeli attacks on refugee camps in Gaza.
Gaza has been ‘free’ of Israel for 2 (?) years, and there are Palestinian refugee
camps there. Huh?

Who in the world are they kidding? Everyone, that’s who, and that’s only because most everyone in the world either hates Jews and Israel, or else believes that Israel/Jews are obligated to lose. How many non-Jews do you know who can stand to accept Jews, as a group, as winners? The theologies of Judaism’s two religious spawns assert against it.

I almost enjoyed the presentations of the speakers at the U.N.’s emergency (?) meeting two days ago. Mahmoud Abbas was wonderful – like an outbreak of the plague. What did he demand? Was it ‘to do justice, to love kindness, and to walk humbly with your G-d’? No! He demanded ‘a united Palestine with Al Kuds Al-Sherif as its capital’.

The Palestinians have spoken, over and over again, at the U.N., in their charter, and in their actions against Israel. This is the way they want it. Case closed.

Please read Arlene Peck, at: http://www.israelnationalnews.com/Articles/Article.aspx/8493
Posted by Schvach at 12:38 PM No comments:

The Filth of the Palestinian ‘Cause’
by: Schvach Yid


Ynetnews.com has a piece (certainly not peace) about a Palestinian Holocaust Museum.
Thank G-d it’s only an on-line, ‘virtual’ entity. But the message is clear, right down to its impersonation of the layout of the U.S. Holocaust Museum in Washington, D.C.

The Arabs were full participants in the Nazi Holocaust of the Jews of Europe. The ‘Palestinian Holocaust Museum’ is the right title, just the wrong accusation. It should in fact display the sins of the Arabs perpetrated against the Jews, beginning with the ‘Arab Conquest’ of the 7th Century C.E., and extending right up to the present moment.

You will recall that Medina and Mecca (properly pronounced Mak’ah, with the accent on the second syllable) are not only the names of the two ‘holy cities’ of Islam, but are also Hebrew words. I don’t know if they have literal meanings in Arabic, or if our Moslem ‘cousins’ merely use these two Hebrew words as proper nouns.

Needless to say, these two Jewish settlements were purged of their Jews in a manner not unlike that employed by the Nazis in Europe during the mid-20th Century C.E., a campaign greatly facilitated by the Arab closure of British Palestine to Jews who attempted to flee for their lives.

And they think we’re the propaganda artists.
Posted by Schvach at 5:56 PM 3 comments:

I Can’t Believe It
by: SchvachYid

Well sadly, in fact, I can. Love us as much as I do, I’m wholly convinced that we Yiddin are cowards. Sorry Jadies and Jents, but over the past 1 ½ millennia we’ve been conditioned into a state of fear. We whore ourselves.

David Bogner, founder and writer of the highly respected Treppenwitz blog site has posted a bit about the assertion of Jew-haters that Jewish blood – as in blood transfusions - is undesirable.

So what? Anyone who thinks Jewish blood is unfit for transfusion can geh am drerd – please! No matter. His next item is more provokingly disturbing. Here it is:

The truth is, just as Israel has had to come to terms with a Red Diamond as its medical symbol abroad (since the International Red Cross made it clear that the Red Star of David is offensive to too much of the world)…

Is Israel to abandoned the red magen David as it’s logo for emergency aide in response to the demands of the global Jew-haters? Is Israel nuts? Haven’t the Israelis heard of self-respect? I don’t know how old this information is; I don’t care. The fact that this applies 'abroad' is irrelevant.

Screw international recognition and acceptance. If Israel has implemented this self destructive act, then the writing is on the wall – in Greek, Latin, Arabic, Cyrillic, anything other than Hebrew.

What of Israel’s flag? What of Hebrew writing? What response will we offer when we’re confronted with the demand to abandon the Hebrew alphabet? Evidently folks, it’s not far off, and the current serving jerks in Israel’s leadership will be eager to comply.

Once upon a time there existed an expression of speech which the Israeli leadership has evidently forgotten; it's 'f*ck 'em'!

We need a brain at the helm. We need some cojones.

‘You Need A Big Oven!’
by: Schvach Yid

That’s what she said. After viewing this video I needed a large emesis basin.

Did you catch the vulgar language? No accents. Are these people really Palestinian Moslem Arabs? Their dreck speaks for itself.

By the way, Mecca, as in the capital of Islam, which is properly pronounced Ma’kah (with the accent on the second syllable) is one of two Biblical Hebrew words for plague – no small wonder (it’s also in the Pesach Haggadah).


My thanks to Gail of the Rubicon 3 blog site for this info.
http://northernva.typepad.com/rubicon3/2008/12/in-fort-lauderdale-here-in-the-us.html