Who Said There’re No Jews in Japan?
by: Schvach Yid

Oh yes there are, and you can find some here:
http://atlasshrugs2000.typepad.com/atlas_shrugs/2008/09/la-shana-tova.html

It appears Chaim Topol and Toshiro Mifune (http://www.youtube.com/watch?v=VIeb51do6GI) have some real competition. Thanks to Pamela Geller, writer and owner of the Atlas Shrugs blog site.

Actually, I'm a big fan of the 'ingathering of the Jews', and of the work done by organizations like Shavei Israel (http://www.shavei.org/en/Default.aspx). Were it only true.
Posted by Schvach at 12:58 PM 2 comments:

Here’s a Beaut
by: Schvach Yid

To all the readers of my blog site, and to everyone else, have a good, sweet year.

Do You Really Think So?
by: Schvach Yid

Your friend and mine, Tamar Yonah, of Israel National News’ on-line service Arutz 7,
has just blogged about Hurricane Ike and its presumptive etiology to a possible furor by the Aybischter over the foreign policy sins of America’s President Bush toward Israel. You can read it here: http://www.israelnationalnews.com/Blogs/Blog.aspx/3#3027

I don’t know. I don’t like to second guess HaShem, even though I’ve probably done it in past blogs. Still, it’s an intriguing prospect; after all, by the Moslems this is the month of
Ramadan (http://en.wikipedia.org/wiki/Ramadan).

A quick survey of the island of Galveston, devastated by the hurricane, will reveal the presence of the University of Texas Medical Branch (UTMB), a campus on which comprises
a medical school, hospitals, academic research buildings, and the most recently constructed Galveston National Laboratory, one of the Bush administration’s contributions to the global war on terrorism. 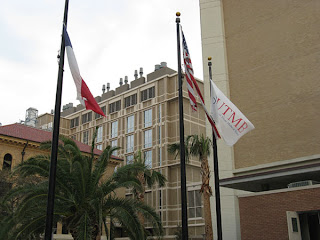 Here’s a photo of the Galveston National Lab:

And here is the URL: http://www.utmb.edu/

Note the venting stacks atop the building; all biomedical research facilities have these, and here, for contrast, is a photo of pillars at the Temple of Karnak located in Thebes, along the Nile River in Egypt: 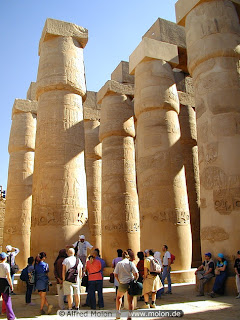 Call me delusional, but I see a similarity.

The Temple of Karnak has survived millennia; I don’t know how well the Galveston National Lab faired this last storm. Oh yeah, hijabs - they’re seen all over the campus.
You’ll just have to take my word for this.
Posted by Schvach at 2:05 PM 2 comments:

The Presidential Race According to Me
by: Schvach Yid

Here’s Schvach’s take on the current presidential electoral race. Obama’s a schmuck.
McCain’s a schmuck. Joe Biden’s a schmuck. So help me, I will never vote for that king of gaffe, and if the TV machers ever again cover Biden yapping about his good old childhood days attending Catholic parochial school, I swear I’ll mail him an embossed
invitation to get crucified.

I sort of apologize to the 2 billion Christians around the world for my overtly bigoted sentiment, but after 1 ½ millennia of Christian Jew hatred, there’s a limit to my sense of guilt.

Oh, how I would love to turn on the TV, view a presidential news conference, and spontaneously long to have sex with the leader of the country. Face it (no pun intended) jadies and jents, what an ultimately refreshing prospect.

Just consider the past alternatives. And what about the leadership of Israel?
Olmert the babe? Rabin, Begin, Barak (no, not Obama), Sharon (nebich), babes? Golda Meir?

What a refreshing idea. Sarah Palin is a babe with oak leaf clusters. I’ll vote for her.
I’ve never voted Republican in my life, but she’s the exception. Screw politics.

So she’s not Jewish. Neither was Woodrow Wilson. Woodrow Wilson was an ordained
Presbyterian minister and served as president of this here country. Do you think he might
have wanted to convert all Jews to his faith. You betchya!

And Palin? No need to ask, of course she wants us on her religion’s bandwagon.
So did Jimmy Carter, and undoubtedly all the others (except perhaps Nixon – he was Quaker – emes).

Schvach, you’re irresponsible. Damn tootin’! What do you think those clowns are?
Have you ever seen such self-deprecating job seekers as those guys? Remember the
Primary debates? They looked like reality TV. Junk. Crap. America’s future president?

I’ve looked for plenty of jobs in my time, and I’ve never conducted myself with such an overt lack of self-esteem. ‘Please hire me’. NO! I’m not taking you off the street. Go back to the Senate and stay there.

But I’ll vote for the babe because she’s nice to look at, and because the others offer nothing at all.

Call me irresponsible.
Posted by Schvach at 10:32 PM 2 comments:

Praise for the Praiseworthy
by: Schvach Yid

Jonathan Mark, the associate editor of the Jewish Week (New York), is an erudite and well crafted writer who, quite frankly, serves as a model for those of us who aspire to write well.
His writing is superlative.

He has just written a blog in which he analyses the success of the shlucot of Chabad Lubavitch, the female emissaries of the Lubavitcher Rebbe to the Jewish communities around the world.

It’s a must read, and you can read it here:
http://blog.thejewishweek.com/post/Sarah_Palin_Shliach.html

If you’re a fan of Chabad as I am, then you’ll love this piece; if not, then there’s hope for you.
Posted by Schvach at 7:35 PM 3 comments:

Why Don’t You Get a TV Already?
by: Schvach Yid


These challenging words were just delivered to me by my mom. Mothers! My mother owns me
every Sunday. In decades past, my paternal grandparents owned us every Sunday; I was in elementary and junior high schools back then. Now, I’m a grown mensch, and not much has changed.

Back to the TV.

I dumped my TV set into the garbage this past May 1st – May Day. No, I’m not one of those pinko Commies of old; it was simply coincidence. I haven’t gone through a manumission as a result; just a little enhancement of shalom babayit, and this despite the fact that my old (and now deceased) grad school advisor was investigated by the Joe McCarthy Red witch-hunt people back in the 1950’s, and who, as a result, lost his academic position at the University of Vermont (link).

I first cancelled my cable TV subscription in March. I didn’t miss the garbage for a second, and then one fine evening, when I was feeling an enhanced surge of perkiness (despite my shriveled adrenal cortices), I schlepped the thing out of my bayit, down the driveway, and onto the curb for trash collection.

A mechaiya! The incessant dribble and junk – fifty-two bucks and change a month worth – were out of my life. I have yet to miss the thing.

So why don’t I get a TV already? Because life without it is better, that’s why. Because if The Huntley-Brinkley Report was still aired by NBC, I’d probably buy one, but regrettably, CNN has chosen to emulate its emulators, and Huntley and Brinkley have both disappeared from the planet, so all that remains to be watched is programmed crap.

Besides, Jblogs are so much better.