S A for Olim Hadashim
by: Schvach Yid


I just read a post by Ruti Mizrachi; it can be accessed at: http://rutimizrachi.blogspot.com/2009/05/farewell-to-land-of-free.html

It’s about the essay she submitted in satisfaction of the requirement for making aliyah via the aegis of Nefesh B’Nefesh. I previously posted about Nefesh B’Nefesh in the past, criticizing their small success in attracting new olim.

Suppose I decided to protest the essay requirement. Easy, do aliyah without Nefesh B’Nefesh. Why an essay; am I a convert? Do I need to appeal to a beit din for permission to live in Israel as a citizen? Am I a child in school? Has it occurred to the people who organize and manage Nefesh B’Nefesh that if they stopped dealing with their applicants as school children they might have better results in attracting new olim? ‘Eeeehhhh…., but we only want young people and families with young children’. I hope that’s not the case. Maybe they want letters of recommendation to boot. ‘Are you, a Jew, good enough to make aliyah? We take only the best, you know’.

On the other hand, the essay may be a requirement imposed by the Israeli government. One can’t ‘run’ the Jewish State stating that the Jewish State will practice exclusion in its
immigration and absorption practices as applied to Jews. That’s a wee bit dumb.

My apology is extended to Mr. Lewis Carroll for thieving his line, but I missed blogging in time for Yom Yerushalayim. It’s not that I forgot – no way – but I couldn’t get to a computer. So what can I possibly say, ‘Go ask Alice’?

So with my great regret, here is my belated Yom Yerushalayim post. It’s about Naomi Shemer, the composer of Yerushalayim Shel Zahav – Jerusalem of Gold, the almost national anthem of the Jewish State of Israel. She wrote this ditty of a Jewish folk masterpiece on the eve of the Six Day War. As I’ve written before, Shemer was Israel’s Churchill of the Six Day War. She provided the spiritual catalyst that sped Jewish youth into battle to win Jewish repatriation with the Jewish City of Jerusalem; to win Jerusalem back from those who detest us. Our city of gold, the city of King David, perched atop Mt. Zion, our geographic aron kodesh above which hovers the Holy Shechinah.

In tribute to Naomi Shemer, who died in June 2004, I offer these renditions of her masterpiece. The first is performed by a young Shuly Natan who is the singer who gave the first public performance of Jerusalem of Gold just prior to the onset of the June ’67 war; however, shortly before that, the composer was interviewed by David Ben Gurion, during which Shemer auditioned the piece. The interview was audio taped and played on Israeli radio years later, sometime in the mid 1980’s, while I was visiting Israel. This, in fact, might be the first ‘public’ performance of Yerushalayim Shel Zahav.

The second video is of a Russian men’s chorus performing the piece a cappella. For those who may be critical of Russian Jewish immigration to Israel, this rendition may provide food for second thought. They absolutely slay the men’s pilgrims’ chorus from Tannhauser (not Jewish in the extreme), although they do sing ‘Halleluyah’ (very Jewish).

The third is a clip from Shindler’s List (did you know that the original title of Thomas Keneally’s book was Shindler’s Ark?). When I first saw the movie, the Shemer song didn’t just bring tears to my eyes; my tears literally shot out – projectile lacrimation! This was only the second time in my life I’ve wept at a movie; I won’t mention the first flick – it’s too embarrassing (okay, okay, it was the conclusion of The Ghost and Mrs. Muir; what can I say?).

I’m an absolute chauvinist about Judaism and my Jewish identity, and an absolute sucker for Jewish bravura.

Talk about absolute, the absolute best biography I’ve ever read was about Naomi Shemer, written by my number one journalistic writer, Jonathan Mark of The New York Jewish Week. His biography of Shemer was written for that paper’s May 31 1996 edition; regrettably, I can’t find it online and so I can’t post a link, although I saved the article as a clipping.

I first heard Yerushalayim Shel Zahav on the El Al flight from New York to Tel Aviv, on the plane’s overhead, as the plane descended on its final approach. It was perfect propaganda – I loved it, and still do.

Why are we in Jerusalem? Because it’s ours, and has been from the very start, and we don’t owe anyone an explanation concerning the matter.


Today, the 25th day of the Hebrew month of Iyar, the 40th day of the counting of the Omer, shortly after 1pm, ‘our time’. Baruch Dayan HaEmet. He was 87 years old.

He became comatose and bedridden two weeks ago, and then died, all following a stroke he suffered 4 and a half years ago.

He was not religious, but identified intensely as a Jew, a German Jew, who had been dealt a lousy blow by his lousy, non-Jewish, countrymen. He went through Kristallnacht,
the night of November 9th, 1938; thank G-d, the Nazi thugs were unable to break down the front door of the family home, but the next day he witnessed his non-Jewish countrymen march his father off to the concentration camp in Sachsenhausen. Baruch HaShem, his parents had family and friends in the United States who had emigrated from Germany only a few years earlier, who cared enough to provide the necessary affidavits which in turn provided for the required immigration visas to the United States. His father, and everyone else, were permitted to leave.

His American citizenship came with a price. He was drafted in the US Army and was subsequently sworn as a citizen only after completing basic training. No free lunch.

As a child he missed his own bar mitzvah, thanks to a bout of Scarlet Fever, so he learned the haftorah to another parshah and did his family proud.

I know I shouldn’t blog now, but I have to, so here is his ‘obit’. In tribute to my Dad, I offer a photo of him during his Army service on Guadalcanal during the Second World War.

May he have the merit to be counted among the souls of Israel. 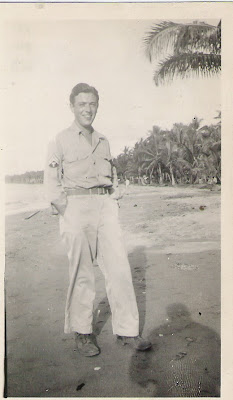 The Continuing Saga of the Wisdom of Vienna Mike
by: Schvach Yid

According to ‘Vienna Mike’, a frequent pointedly opinioned commenter to Reb Tzvi Fishman’s blog From Hollywood to the Holy Land which appears on the Israel National News web site Arutz Sheva, the Obama administration has recently passed through Congress a bill that provides 20+ million dollars for the emigration of Hamas /Palestinian refugees of the Gazan War from Gaza for settlement in the United States.

I hope it’s true. I don’t care what sort of ‘security risk’ those people pose for the United States. I don’t give a damn how socially disruptive those people may be for Americans.
I much prefer to see those people over here than over there.

Why? Because no one in the United States will put up with Moslem Arab terrorism in the United States. The UN will never object to American law enforcement agencies ‘going after’ law-breaking Moslem terrorists. By contrast, Israel is told to put up with them. The Jews of Israel are obligated to accept the murderous tirades and recidivist Jew hatred foisted by those people. And if they’re over here, then they’re not over there – in Israel.
A Mechaiya!

I have a satisfying remedy for coping with those new, soon to be, immigrants to America.
Settle the whole bunch ‘down here’ where I live, in this sun-drenched and humidity-plagued corner of America’s Bible Belt. One of the numerous local churches has recently erected a cross – you know, of the crucifixion variety. It’s a mere 150 feet tall. It glistens white in the American South’s sunshine. It manages to ‘cast a giant shadow’ (sorry Mickey Marcus). I walk out of my local supermarket, and there it is. I drive out of my bank’s parking lot, and there it is. I drive home from my dentist’s office, and there it is. My new neighbors will love it – I am sure.

So why not? Pack ‘em up, the poor devils. Send them over – please. There’s lots of empty land ‘down here’ – lebensraum for those Hamas-loving, Jew-hating, Palestinians. Let them live under the boot for a change, in the land of ‘infidel’ proselytizers, in the land of pick-up trucks and Second Amendment rights.