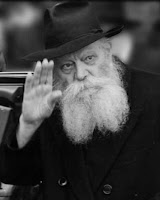 Today, the 3rd of Tammuz 5767 is the 13th Yahrzeit of the Lubavitcher Rebbe Menachem Mendel Schneerson. The ‘Rebbe’, as he is fondly remembered, and as he was addressed and referred to during his leadership of the Lubavitcher Chassidim, probably did more to instill a sense of pride in Yiddishkeit than any other effort made to this end. Many programs offered to the Jewish community outside Lubavitch are patterned on the outreach efforts inaugurated by the Rebbe. A local reform synagogue in my immediate community even holds ‘Tefillin Sundays’ for its teenage youngsters, based on the Rebbe’s tefillin campaign.

The Lubavitcher Rebbe stressed kindness between Jews, and between Jews and our non-Jewish neighbors. Even during the disgrace of the riots in August 1991, the Rebbe had no stern words for the rioters and their leader. The Rebbe offered the Jews of the world menschlichleit and Yiddishkeit, and drew the leaders and celebrities of the world to obtain a knowledge of the beauty and significance of Judaism. With the approach of the 1st Gulf War in 1991, the Rebbe announced ‘there is no safer place in the world than ’, thus bolstering our faith in HaShem and our lives in the .

Yesterday I received a form letter from Machne Israel of Lubavitch World Headquarters - a schnorer brief - which informs its readers of the many contributions Chabad Lubavitch has made to world Jewry, most especially in the realm of Torah observance and group self-esteem.

This letter compares the resources available to the Jewish community prior to the Rebbe’s efforts, and since, including Lubavitch’s creation of Jewish pre-schools and day schools in more than 600 locations around the world, Chabad’s student programs offered on university campuses nationwide, the establishment of Jewish resources in American communities with small Jewish populations, which include shuls, schools, libraries, mikvehs, and hevra kedishas. Included in this list are the ever expanding programs and resources offered to Jews living and traveling abroad, in the most ‘unJewish of places’ – countries which have never seen a populous Jewish community.

These programs have been emulated by other Jewish organizations, but to be sure, the Rebbe started the whole thing and popularized them as well. He put the hareidim, and Jews in general, on the map in a positive new light. We Jews today are much better off thanks to the Rebbe. He looked far beyond his small group of adherents to the world Jewish community at large. No other leader has accomplished what he has on our behalf.

I would love to see what you have to say about the Rebbe being a Torah giant and Gaon in every aspect and area in Torah.

Tom:
I'm not qualified to judge that, but where Jewish outreach to the general Jewish community was concerned, as well as leadership to the adherents
within his chassidic group, he was probably the best, without exaggeration.