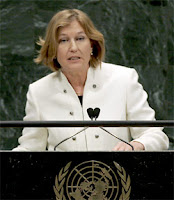 Yesterday, at the UN. In English no less. It was the usual rhubarb, except the Israeli Foreign Minister accused that less than august international body of favoritism against . She delivered a lot of cliché about peace and mutual security. She did her standard vocal impersonation of Yitzhak Rabin (may he rest in peace) – she even invoked his ‘enough is enough’ bit (don’t you think she sounds just like him? I do).

More yak, yak, yak. The UN TV camera regularly zeroed in on the Arab Palestinian representative. It was dry. It was canned.

But then Mme. Livni did us proud. She did the right thing. She spoke words of Torah to the membership of the UN General Assembly.

When I was a lad in college taking Introductory Physics, we were taught a valuable lesson concerning problem solving; in fact, I suspect this singular teaching may constitute the central concept of Physics – all the rest may be commentary. We were instructed to solve a Physics problem ‘from first principles’ – to begin with a definition, and derive the solution from there.

This is precisely what Foreign Minister Livni did at the conclusion of her presentation to the UN General Assembly.

After so much drone, she informed her audience that this is the Festival of Sukkot. She explained the significance of this Festival, and the significance of Jews dwelling in sukkot (which she translated as ‘huts’) as a component of our religious observances. She then informed her audience that those sukkot provided us with shelter on our ancestors way to the Promised Land. Bravo Tzipi, finally, someone in the Olmert government got it right!

Finally (really) Mme. Livni concluded her presentation with words of Torah from the siddur:
“As we turn to and say in our prayers every day: 'Spread over us the tabernacle of your peace....' May it be in our days, and for all nations. Amen.”

The response from the UN General Assembly was applause. They applauded the Israeli Foreign Minister. I’ve never heard any assemblage of the UN representatives applaud any Israeli speaker. Perhaps they have and I’ve simply missed it – I don’t stay glued to C-SPAN you know.

Their response wouldn’t have been better had she blessed her audience by reciting the Birkat Cohanim.
Not that we should be grateful for the acknowledgement. It’s HaShem who gives, not the UN, but it’s always nice to have friends rather than enemies (or as one pr billboard stated: ‘It’s nice to be important, but it’s also important to be nice’).

Not long ago I read an article on line in which the author stated that two delegations visited , each one in succession. The first delegation was taken on a tour of ‘modern’ - upon their return to the the anticipated funding was not approved. The second delegation was taken on a tour of the religious sights and communities in . They were shown religious Israeli Jews at work and study. Bingo – received what it had requested.

Applause means acceptance and approval. In the Chumash we are commanded to function as a Nation of Priests, not as overly assertive know-it-alls who spawn swaggering, sunglass-wearing tattooed kids who spew Arabic colloquialisms rather than words of Torah.

‘It’s a Tree of Life to those who cling to it, and its followers are praiseworthy’, we chant in schul as we return the Sefer Torah to the aron kodesh. These are not empty words – the world is willing to accept the religious devotion of Jews, but not the scheiss of secular Yiddin who emulate the emulators and intentionally violate everything in the ‘book’ in a vain attempt at profundity and superiority. Remember (and not to be offensive) that one third of everyone in the world worships one of us as their Savior. This is no slight matter. A great deal is expected from us, and I don’t mean Nobel Prizes.When the government of gets it right, then opinions are swayed in our favor.

Had Tzipi Livni, as the Foreign Minister of Israel, stood on the podium of the UN’s General Assembly and talked politics and diplomacy until doomsday she would have been greated with dismissal. Had she yapped biblical archeology, she would have invoked the same response. But a divrei Torah, as brief as it was, delivered the right message. This is our claim to the Land promised to us – all of it, and no argument can be devised that can displace it or us.