’s Bulldog for the Jews
by: Schvach Yid 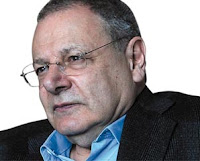 The great Jewish British writer and historian, Martin Gilbert (right), has contributed a biographical piece to this month’s edition of Hadassah Magazine titled A Well Spoken Friend, on the efforts of Winston Churchill on behalf of world Jewry. Gilbert’s new biography on the same subject, Churchill and the Jews: A Lifelong Friendship, is due to be released later this month (Henry Holt and Co., publishers).

According to some sources (not Gilbert’s Hadassah Magazine article), Churchill’s American mother, Jenny Jacobson, was Jewish.

Martin Gilbert paints a picture of Britain’s former Prime Minister and oratory hero of the Second World War as a vehement opponent of the anti-Semitic persuasions of his day, that in 1922 he asserted that the Jews were in ‘Palestine’ by right, and as a virtual lone warden who sounded off against the Jew-hating tirades of the founder and leader of the Third Reich in the early 1930’s with stern warnings against the consequences of appeasement. Gilbert further represents Churchill as a supporter of Zionism who opposed ’s cessation of Jewish immigration to British Palestine in 1939.

At the War’s conclusion, Churchill is said to have had hopes of persuading the King of Saudi Arabia to accept a sovereign Jewish State in British Palestine, but as Gilbert writes, then President Franklin Roosevelt delivered a ‘sucker punch’ by scooping Churchill’s visit with the Saudi king and assuring the King that the US would do nothing to aid Jewish endeavors in conflict with Arab interests. Nice! (Wasn’t FDR supposed to have been descended from a Jewish Dutch immigrant family?)

Martin Gilbert’s article is concluded with an informing bit about the continuing racial hatred by Jew haters and their views of 'beneficial' political policies. If you can get a hold of the October issue of Hadassah Magazine, please do.

Anonymous said...
This comment has been removed by a blog administrator.
1:13 AM

Anonymous said...
This comment has been removed by a blog administrator.
10:58 PM