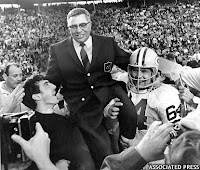 The Best Defense…
by Schvach Yid

We Yiddin are fond, even certain, to take our wisdom from Torah, both Tanach and the teachings of generations of our sages. Great truisms are, on occasion, offered from other sources which have at least the potential for practical application in our Nation’s dealings.

Whether or not we are able to muster an ability to identify with, and inculcate, such philosophies is beside the point. Necessity is the mother of invention, and need is, or at should be, the great motivator. Survival, and provision for our young, are paramount.

In , football season has recently begun. It’s football, not baseball or basketball or hockey, that is the great American sport. It’s not just competition for its own sake. It’s controlled combat. The players even dress for this parody of war, like knights in armor. And like all combatants in the midst of battle, in football too there is an offensive force that lines up and battles a defensive force. Ground (land) is gained and lost. The whole thing is regulated by referees, and by the clock. It’s controlled and limited. Often, but by no means always, the participants go home safe and sound. On a few occasions, tragedy strikes.

I have no use for sports. For me they have always lacked information and entertainment. I’m not much into competition, and competition for its own sake makes no sense to me; I have my fill of it in the real world - I don’t need parodies.

Vince Lombardi made a significant contribution to the world of philosophy; I suspect, just about everyone has heard it. I have, and I know nothing about football, and I mean nothing!

The great Mr. Lombardi intoned: ‘The best defense is a good offense’. Surely you’ve heard this.

Evidently, Ehud Olmert, the Prime Minister of Israel, and his pals have not. This philosophy of Vince Lombardi’s is about winners and winning. Ehud Olmert’s philosophy, as yet undefined and unannounced by him, is apparently not. Unless Mr. Olmert has some trick up his sleeve, unless he’s playing rope-a-dope games of one sort or another, and the Jewish people in general are hurling headlong into another national tragedy.

Whether or not Olmert and Company can enunciate Vince Lombardi’s philosophy of strategy is unknown to me. What is certain is that weakness, the position of hiding from one’s own fear by playing the role of superiority and condescension, never works. One’s enemy will only smell blood, and will demand it. Swift, decisive action works - just ask Vince. One’s adversaries won’t even consider the possibility of the value of one’s possessions if the possessor proclaims his eagerness to abandon them. The simple capitulation of agreeing to talk about divestment sends a crystal clear message to our foe – that we can be dismissed, absolutely literally, from our land, that it lacks value for us. There is only one possible response, and there’s no need to worry about accusation and unkind offensive analogies. Those who are in the know, know. Vince Lombardi knew, and just played a game. ’s continuation as the sovereign Jewish State is no game.