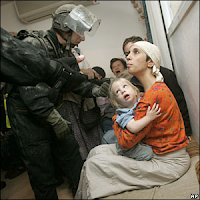 When It’s Your Conscience That Comes Knocking
by: Schvach Yid

Tamar Yonah, a contributing blogger to Arutz Sheva, has posted a doozy at http://www.israelnationalnews.com/Blogs/Blog.aspx/3#2258, titled I Had A Dream.
Perhaps the current leadership of should note the progression of the graphics displayed in this piece - I doubt they ever bother to take the time to read.

In the mid 1980’s I spent a lengthy period of time on a kibbutz – a member of the TAKAM kibbutz movement - a kibbutz movement that's secular and non- communist. Present on the kibbutz was a small group of non-Israelis who were affiliated with the Conservative Movement of Judaism; basically, they were pariahs among the non-Dati (non-religious) kibbutz members. Basically, in , plenty of the non-religious Jews hate the frumies. These Conservative Movement Yiddin were no where close to frum, and basically, they weren’t wanted just the same. The Christian kibbutz volunteers from were pretty-much ‘in’ on that kibbutz – the kibbutz men got to ‘schtup’ the volunteer women, and so all went well with that community. The situation for the semi-religious Jews from abroad was entirely different.

The number one lesson I learned in concerned domestic politics: the non-religious despise the datim. It’s an odd lesson to be learned by a Jew who traveled to the Jewish State of Israel – the ‘’. The rules of group dynamics combined with ’s public relations propaganda had me hooked on Jewish brotherhood, and mutual support and love based on our common Jewish identity – having had the shit kicked out of us during the 2nd World War.

Well, in , it seems, (well actually, it’s overtly stated by enough Israelis) this kind of Jew or that kind of Jew is responsible for this or that. So the embittered Holocaust survivors had it out for those who hadn’t paid their price for Jewish existence and the establishment of the Jewish State. The non-religious weren’t coy in the least for blaming all of Jewish experience during our millennia-long sojourn on the Jewishly religious. They were not to be emulated; they were not to serve as the paradigm for Jewish existence in Herzl’s version of Brave New World - Der Altneuland (sorry Aldous). Don’t you know, in a sick introvertedly directed reversal of Jew hatred, there appears a pathological distain for frum Yiddin levied by a not so small proportion of non-religious Israelis. Go figa!

The Jew who hates his fellow Jew for being ‘too Jewish’ needs to have his/her head examined.

Ehud Olmert and company need to make clinical appointments – pronto. On their current tack, not too much time remains for them to reverse course and avoid another Jewish catastrophe – no Ehud, not a religiously frum – that’s not a catastrophe. Far from a catastrophe, frumkeit is the way Israeli life should be. Among the comments I heard in about the Datim was that they’re ‘crazy’. I think any Jew who thinks about Jewish commitment in this way is the crazy one. Regrettably, this seems to be the opinion of Ehud Olmert and his pals.

Perhaps Olmert’s wish may come true. When Secretary of State Rice finally realizes her dream of becoming the manager of a professional football team (American football), Olmert may obtain a new position of self-perceived importance for himself here in . Waterboy sounds about right. Cheerleader might be even better, but I think he lacks the required physical attributes for this position.

Not sure whether you agreed with the piece I wrote or respectfully disagreed. I appreciate you reading it though. Anyway, the photo is from the AP, not me or A-7. Maybe I should have noted that. 'Al Chet'(hebrew), I beat my chest. (grin)
best,
tamar

p.s. You're a good writer. i like your blog.
tamar

Tamar:
I agree with your article. My blog is intended to serve as a comment to your A7 article; its point is to place additional perspective on the phenomenon of a Jewish government that pits its Jewish military against
some portion of Israel's religious Jews.
Thanks for the compliment. I enjoy reading your perspectives on life in Israel.

Tamar;
Thanks for your good wishes.