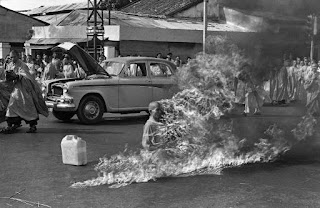 Hell On Earth
by: Schvach Yid

For all my fellow Jews who believe Buddhism, and its progenitor Hinduism, are religious faiths of peace, love, understanding, self-fulfillment, enlightenment, illumination, self-actualization (a term given to us by Abraham Maslow), and everything else that is about self-discovery and self-improvement, I offer this blast from the past. Contrary to the ways of salesmanship, mass media marketing, and hype, the truth ‘will out’ (Chaucer – sorry!).

Back in the days when Vietnam was a key name in upcoming American political concerns – second only to The Soviet Union, but not yet America’s number 1 political ‘challenge’ (as was the USSR) – American TV viewers were treated to this on-screen view. It killed the TV commercials of the day.

This piece of social/political protest schtick passed quickly from the American public view, but established in the American mind a picture of the then up and coming Vietnam (then two countries – North and South) as a place where ‘I’ would rather not be. This photo didn’t belong on a travel brochure, but it did make it onto a page of Life magazine, which back then was ‘numero uno’ among weekly picture mags. Ingmar Bergman, the Swedish film director and writer who passed away just a couple of weeks ago in July, found this televised drama sufficiently convincing that he included this scene in one of his movies (I don’t recall which one), as the actress Liv Ullman watched in horror as her character viewed it on TV.

And just a few years later, Eastern religions became all the rage. And guess who jumped onto the bandwagon like crazy. Yup, Jews - teenagers and young adults. They should have probed a bit further.

Self immolation is okay in a Wagnerian opera - but in real life?

The burning gentleman’s name was Thich Quang Duc. He was a monk, folks, an acolyte. Do you know what that means? An underling, a subordinate – disposable. He wasn’t a priest, and he certainly wasn’t the head (roshi?) of a Buddhist temple. He wasn’t big and powerful and full of authority. If you want to read a fictional account about those, just read Yukio Mishima’s The Temple of the Golden Pavilion, or take a job with my former place of employment – you’ll meet some of them there. You can also read Roger Kaminetz’s The Jew in the Lotus, but you’ll have to be alert, for it’s only the very rarest of lines in that book that hints at some of the ‘realities’ of Buddhist life.

If my memory serves me well, and it rarely does, this human candle-for-protest at first sat very still, and then slightly ‘lost it’ – he fell sideways, righted himself again - and then collapsed. And no napalm was used. We Americans used that stuff to similar effect a little later on, in the same place.

I wish all my fellow Yiddin who dabble in various Eastern religious pastimes, and who sing their praises, would consider the flip side of Buddhism. It ain’t pleasant. A woman who splatters boiling oil onto her face for the purpose of obviating the desirous advances of hungry men, in her attempt to attain super-human spiritual status, has in fact chosen the wrong ‘path’ in life.

It goes way beyond silly - it’s self abusive. It’s the emotional/spiritual analog of tattooing one’s skin. It isn’t the smart thing to do. And it’s a lousy paradigm for emulation.

May Thich Quang Duc rest in peace. He should have attended yeshiva instead.

Here’s the piece from Wikipedia:

Thich Quang Duc, 1963
Thích Quảng Ðức photographed during his self-immolation. The photographer Malcolm W. Browne won the 1963 World Press Photo of the Year for this image.[1] Another reporter that witnessed the event, David Halberstam, remembers "As he burned he never moved a muscle, never uttered a sound".