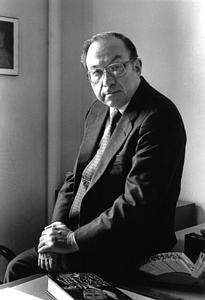 Another Death in the Family
by: Schvach Yid

Thanks to the New York Jewish Week, to which I have a print subscription (rather than an on-line subscription, and I hate newspapers – go figa), I’ve just learned (yesterday) of the death of Raul Hilberg on , at the age of 81.

Dr. Hilberg was renowned for his study and analysis of the Holocaust in his famous 2 volume work The Destruction of the European Jews (1961), which was followed by a 1 volume student

paperback edition. He appeared as an analyst and commentator in Claude Lanzmann’s Shoah, which aired in the on PBS in 1987.

Viewing his interviews on that TV series (actually a film divided into segments for TV broadcast) I took an instant liking to Prof. Hilberg’s style. It wasn’t until a later date that I learned he was a native of , like my mother. Evidently, some sort of personality vibe courses along with the TV broadcast signals between the Jewish Viennese and their immediate descendents.

May his memory be for a blessing.

I used to be very good friends with his daughter, Dvora. We've lost contact, but his death was a surprise to me as well.

Tamar:
I consider Prof. Hilberg to have been one of the great heroic advocates of the Jewish community.
Perhaps you and his daughter Dvora will reestablish contact - I'm sure
she has plenty of good things to say about her father.

Please come to cheap linden, we will give you a great surprise.