The anniversary of Kristallnacht is this Friday, erev Shabbos. The night of was a night of rioting and brutality committed by the Nazis in cities all over . Their targets were the Jews of those communities.

Kristallnacht constituted a personal and group defining moment forJews in , , and everywhere else it occurred. For them, it wasn’t a gruesome and heart rending news event (as would be the tragic assassination of President Kennedy). Life had turned against them; their countrymen had betrayed them. My mother, Vienna-born and raised, said she had no idea of the extent of Nazi sympathy in her native city, but during the day of November 10, 1938, the party pins came out of the pockets and onto lapels and blouses and as a result, a great wisdom was provided to the victims - the great betrayal had been placed on public display. My mother’s school teachers, and parents of friends of my mother whom she had never suspected of Nazi leanings, let alone of Party membership, had revealed their true selves as Jew-hating Nazi nationalists.

In his great volume on the subject of Nazi Germany titled The Rise and Fall of the Third Reich, William L. Shirer calls the event of ’s annexation by , ‘The Anschluss-The Rape of ’. Baloney! Those who ‘came out’ for the ‘great’ event didn’t witness any violation of ’s national integrity. Instead, the witnesses observed joy and jubilation by the ‘good’ people of . Jumping onto the bandwagon never constituted rape; indeed, skirts were lifted for an entirely different reason - it was more of a homecoming than anything else (Hitler’s ‘triumphant’ entry into Vienna had occurred on March 14, 1938; he was a native of Austria and not of Germany, you will recall).

On November 7, 1938, a seventeen year old German Jew named Herschel Grynszpan had shot and killed Ernst von Rath, the Third Secretary of the German Embassy in Paris (who, according to Shirer, had himself been targeted by the Gestapo because he had never shared the Nazi penchant for Jew-hating; Grynszpan had actually been on the hunt for Count Johannes von Welczeck, Germany’s ambassador to France).

The night of , the night of the Nazi rioting for which Kristallnacht is named and famed, marked the annual celebration of Hitler’s Beer Hall Putsch in in 1923. Hitler and Goering were the guests of honor at that year’s fête, after which the glass-shattering progrom began in cities throughout .

Kristallnacht went way beyond drunk and disorderly; it was a planned event organized by the SS’s number two man in the driver’s seat - that no friend of any Jew – Reinhardt Heydrich, who had also served as the mastermind of the ‘Final Solution’ planned at the Wannsee Conference in January, 1942.

One may recall Martin Luther, the founder of the Protestant Reformation, was born (as opposed to 1938 – get it? Hitler, Goering, and pals wish you many happy returns, Marty).

Do you know what Martin Luther said about Jews? Have you ever read his ditty titled The Jews and Their Lies? Liberty Bell 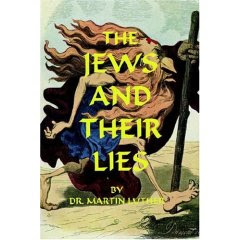 Publications publishes their version of this slim tome. The publisher’s comments are just as telling as is Luther’s text.

Well, just as day follows night, Kristallnacht turned into ‘Kristalltag’. My mother, then fourteen years old, was home alone. My maternal grandparents had left their apartment on Westbahn Strasse in the Seventh Bezirke (district) of in yet another desperate attempt to appeal for entry visas to – anywhere, as long as it was off the continent of . At around a knock came at the door. The voice of the apartment building’s female superintendent – hausmeisterin – announced through the closed door that my mother was required to allow her into the apartment, that some men were with her and that they needed to speak with her.

Upon opening the door, my mother viewed the familiar hausmeisterin and two men standing in the entrance. The men were dressed in the standard SA uniform – brown shirts and trousers, black boots, with red arm bands that bore swastikas. They walked into the apartment and the men, who according to my mother were very polite and proper, informed her that she and her parents had to vacate their apartment. They then escorted my mother to the apartment immediately below theirs, occupied by another Jewish family.

Her parents returned to be greeted with the bad news. Several Jewish families had been corralled into that apartment; they remained there until their exit from ‘their country’ (their citizenship had already been confiscated), but later that day, my mother and grandparents were permitted to briefly return to their apartment to gather a few things, only to discover that it had been thoroughly ransacked; according to my mother, ‘everything was taken’.

If you think this isn’t the worst that could have happened, you’re right. My mother’s maternal grandparents were still in (my maternal grandmother was native Slovak) and refused to leave. By War’s end my grandmother had received a letter from the International Red Cross informing her that her parents had perished in .

A similar event occurred with my father’s family in Bremerhaven, Germany, except that the rioting Jew-haters tried to break down the front door of their house in an attempt to do Gd knows what; thank Gd, they didn’t succeed, but the following day, November 10, 1938, my paternal grandfather was ‘collected’ and shipped off to the concentration camp in Sachsenhausen. Fortunately, their entry visas to the arrived, and after something like a two week incarceration in Sachsenhausen, they (my father, uncle, and paternal grandparents) were permitted to leave for the . They too had been kicked out of their home on November 10th.

Overt reminders of lousy life events have a habit of popping up after the fact. In the late 1980’s my parents and I attended an ‘air show’ – a display of primarily military aircraft, both on the ground and in flight, complete with various re-enactments of WW 2 air battles. As we left the show grounds, we passed a stand of men dressed in WW2 German military uniforms, complete with red swastika arm bands, black boots – the whole spiel. My father, who had served in the US Army during the Second World War as a hospital medic on Guadalcanal and Guam, looked at me in amazement and asked, ‘why are they dressed like that?’