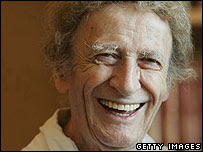 Death of the Silent Jew
by: Schvach Yid

Marceau was best known for his theatrical work as a mime artist. He was born Jewish, was forced into hiding during ‘the War’, and 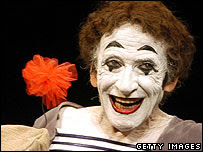 emerged from the protective arms of the French Catholic Church safe, sound, and a bit less Jewish, according to his statements made at a National Press Club luncheon, where he appeared, with functional vocal cords, as the honored guest on several occasions.

I included a brief bio about this favored son of Judaism in one of my earlier blogs dated titled The G Word; here’s the link:
http://schvach.blogspot.com/2007/05/g-word-by-schvach-yid-i-wonder-why-non.html

And thanks to Yisrael Medad of Arutz Sheva for posting this bit of news; here’s the link:
http://www.israelnationalnews.com/Blogs/Blog.aspx/5#2304

Here is a link an account of Marceau’s experiences under the Nazis from The Canadian Press, at
http://canadianpress.google.com/article/ALeqM5hHtBwOW585VVoSC05yRgfkTuEumg

May he rest in peace.