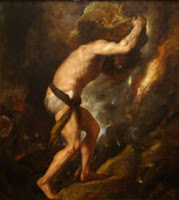 The Sisyphean Existence of Jews:

Up and down, up and down, etc. This seems to be the life of Jews. The existence of a Jewish state is too much to bear for many non-Jews, despite the seeming support of evangelists who, of course, want to proselytize (and don’t you know, when the ‘End Times’ arrive that it will be the Jews who suffer most?). , that fingernail clipping of a country, is too much to tolerate (and I do mean tolerate, like a bad odor). In a recent article that appeared in the Opinion section of Arutz Sheva (Israel National News) titled ‘Where’s ?’, April 11, 2007, Jodi Levi provides useful stats about Israel and ‘Palestine’. At first I thought the problem was the partition of ’s Palestine Mandate. But it may be that Medinat Yisrael is just another one of our Jewish Sisyphean exertions. ’s current auto-da-struct (get it?) may derive in part from the partition of the British Mandate, so let’s consider , , and that gd-all-mighty Palestinian homeland. I hate to sound like Lyndon LaRouche, but it’s all about , ’s dedication to , ’s contribution to the , ie., a model of British monarchal government in the Middle East – Jordan, and that little pixie of a monarch, King what’s-his-name and his dearly departed father King Hussein, the daddy of pixie kings. I think the current ‘serving’ king of should update his resume and move to the land of the pixies, . They’re used to his sort. The sacrifice of Jews on behalf of British self indulgence is absurd, but typical of British narcissistic thinking. The Palestinian homeland already exists, is three or four times the size of the Jewish National Homeland, and indeed is occupied, for all intents and purposes, by . This is a poor excuse to go after . I think the British should get out. David Bogner, in his blog Treppenwitz, http://bogieworks.blogs.com dated Sunday Aprit 22, 2007 has reminded us of what the current predictament in Israel is all about, and who's right. It was and continues to be the Arabs/Moslems/ Palestinians who reject us. They not only tried to expunge the nascent Jewish State and its Jewish inhabitants, they were also full participants in HaShoah.

But there’s more. We’re back to my family. My mother has a cousin, Viennese by birth (like my mom), now an old man. He too escaped following the Anschluss and Kristallnacht, to . Once there he succumbed to that great British epiphany – he change his name from its very German (and perhaps he thought Jewish) sounding original to a very close sounding English facsimile (aren’t ‘English’ and ‘facsimile’ mutually exclusive?). He dumped Judaism, joined/converted to the Church of England, married a true Britisher, and set up shop – his new life. This was back then. Several years ago he and she flew over for a visit – on Yom Kippur. Thanks! The next day I dropped by to introduce myself and say hello. He, the denying apostate, laced into me (in perhaps the thickest German/Austrian accent I’ve ever heard – and I’ve heard plenty) about my having observed the chag, fasting, and the amount of time ‘they kept’ me in schul. She was a bit better comported, but equally offensive: ‘isn’t it a pity the Jews never accepted Jesus?’, to be read: isn’t it a pity that Jews and Judaism continue to exist? After all, her apostate husband is no longer a Jew, is he?

If you think has been ‘good’ to the Jews, try reading Barbara Tuckman’s Bible and Sword. In , as elsewhere, we’ve led this yoyo existence, all toil with no lasting profit or benefit. It’s been a recurring theme in the Jewish existence in the West.

I had a job as a laboratory technician at a university – biomedical work. Upon being hired in a new lab, my new boss introduced me to his lord and master, an older man, Indian, an immigrant to who had been here almost his entire adult life. He endlessly chomped on the bit. He seethed with hatred against all who are Western and White, and against Jews. Upon our introduction he launched into a soliloquy about my family’s history. It went something like this: ‘I know all about you; your family came over in the great wave of immigration’ (not true); ‘they settled on the Lower East Side of Manhattan’ (not true); ‘they spoke Yiddish’ (not true, see earlier blog). It went on non stop for a minute or so. Then he delivered the punch line: ‘You are a Jew, but I am a Christian Man!’ (I wondered if he had prepared and practiced this before hand). He stood all of 5’5” or so, and had the personal character to match. A Hindu who became Christian; an Indian who became American, and what did he learn – to hate Jews! And this guy came to to do a post doctoral fellowship in the lab of a Jew who, incidentally, would later receive a Nobel Prize – also Jewish. This man of diminutive stature (in more ways than one) chomps away – at Jews, and this was no isolated event. On almost every job I’ve had I’ve been confronted about being Jewish, as though the mere presence of a Jew serves as a source of antagonism.

David Mamet, in his book The Wicked Son, puts it succinctly and correctly in the first chapter: ‘The world hates Jews’. And one might follow this with 'appeasement is always the wrong policy'. Whether it’s ’s current dilemma and lack of proper leadership, or whether it’s here in the , we stumble and slip and strain like Sisyphus, and it never ends. I think Mamet is right in his terse declaration, and there’s absolutely no reason for this hatred. It’s hatred by default. It may be based on a narcissistic wannabe mentality and the often cited phrase – turned – accusation from the chumash ‘chosen people’. ‘Oh yeah’ I imagine them saying, ‘we’ll show you who’s chosen’. Thwack! Or a favorite assertion of some portion (I imagine large) of ’s Black population, that it is they who are the biblical Hebrews, having gone through 400+ years of slavery and subjugation, as they now rip off the ‘raiment’ of the descendents of their former oppressors, etc. (never mind the assertions of others of the same community that Black Americans are the descendents of the pharaohs). All this attention. What have we done to deserve it? Two billion Christians, 1.5 billion Moslems, 1+ billion Hindus, 1+ billion Chinese, and a lousy 12 million Jews (many undoubtedly think 12 million lousy Jews too many!). Well, let’s not forget that the bull's eye is the smallest circle in the target, but who wants to be a target? Do they all think that all roads lead to J’lem? We are the target. Oprah Winfrey talked about her career on TV – ‘if Steven Spielberg can do it so can I’. Not Johnny Carson, or Clint Eastwood, or Sylvester Stallone, or Swarzenegger (talk about making it big!). Today would she cite Eddy Murphie? Probably not. The Jew!

Al Sharpton did a cameo in Spike Lee’s movie about Malcolm X. Sharpton stood on a ladder. What came out of his mouth? 'Jews'! Has it occurred to him that he worships one of us, and that he’s a follower and promulgator of the teachings of Martin Luther? Do you know what Martin Luther said about Jews (after we declined his offer of apostasy)? And Sharpton wants reparations. I’m a first generation descendent of holocaust refugees. If you think that hasn’t determined the course of my life, guess again. I receive nothing. My only entitlement is citizenship in , upon my request. No thanks!

Yo, Schvach! Great post. I've always likened Israel to a fingernail clipping, too!

Truly, being Jewish is a blessing and a curse...thank heavens the food is good or I'd just fuheggaboudit.

oy i love this post...the bullseye is the smallest circle in the target...brilliant...i'll remember that...hiiiiiiiiiii schvach...i'm coming to visit a lot now that i can get in...my email is marallyn@gmail.com...hope to hear from you soon...great post

Yo Yenta: Thanks for inaugurating the
comments to my blog site. The Yenta having done so is an honor -emes!
-Schvach

Marallyn: Thanks for the compliment.
By the way, if you're British, please
forgive my unkind references. I'm just steamed over that bit of history
which still runs current.
-Schvach

Anonymous said...
This comment has been removed by a blog administrator.
1:24 AM

Anonymous said...
This comment has been removed by a blog administrator.
11:07 PM